Broome is a hub for the Kimberley Region of Western Australia. Six kilometres outside of town is Gantheaume Point, unlike any other attraction in Australia. The red sandstone cliffs and coastline have a vast collection of dinosaur footprints.

The Gantheaume Point dinosaur footprints cover an 80-km area. They are more than 130 million years old and belong to 21 different species of dinosaurs.

They formed during the Cretaceous period when the creatures, including the theropod, sauropod and stegosaurus, walked in coastal marshes near Gantheaume Bay, and pebbles filled their footprints, preserving them.

These prehistoric relics are most visible at the Gantheaume Point rock pools. Though it is possible to find these spots on your own, you should consider taking a dinosaur footprints Broome tour if you want to get right to the best examples of this unique phenomenon. 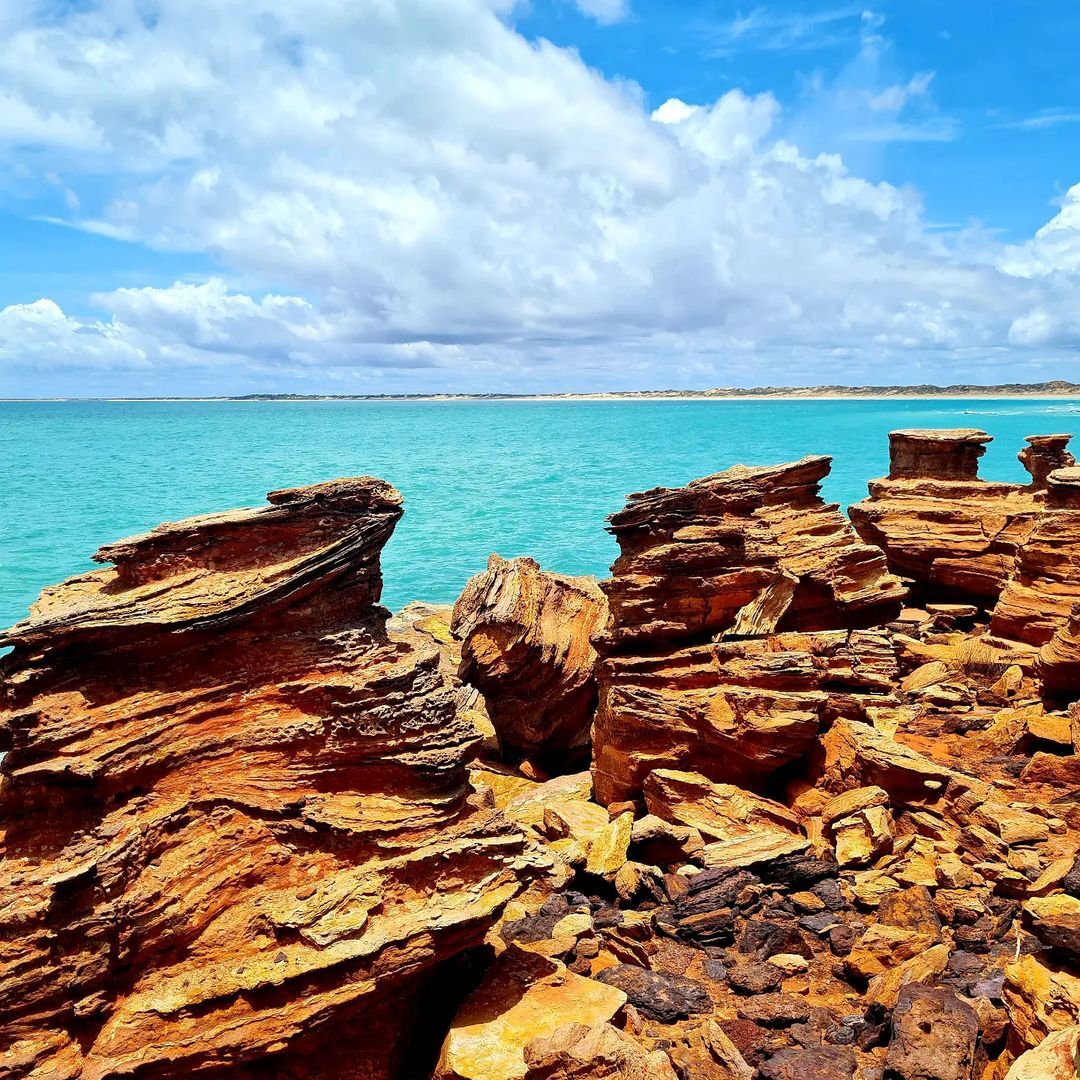 In general, the best time to view the extraordinary dinosaur tracks is between April and November, which is the driest and coldest time of year.

Before you head out to the preserved tracks, be sure to check the tide first. When exploring the Broome dinosaur footprint site, you should aim for very low tide.

Information to help you plan the timing is available at Broome's visitor centre.

There are different ways to see the Gantheaume Point dinosaur footprints.

The boat and plane tours may also take you to explore other area sites, such as a World War II wreck.

What should you bring on a Gantheaume Point Broome trip?

Gantheaume Bay is a one-of-a-kind site, so you will want to bring a camera. The rock formations along the coast make this a very scenic area, so there are more photo opportunities aside from the dinosaur tracks.

Explore the red sandstone cliffs, climb the rocks or just take in the extraordinary blue water of this scenic area.

Unlike stereotypical beaches, the landscape at Gantheaume Point is very rocky. Therefore, you should bring soft-soled shoes, which will help you handle the rock pool terrain and prevent slipping on the rocks. 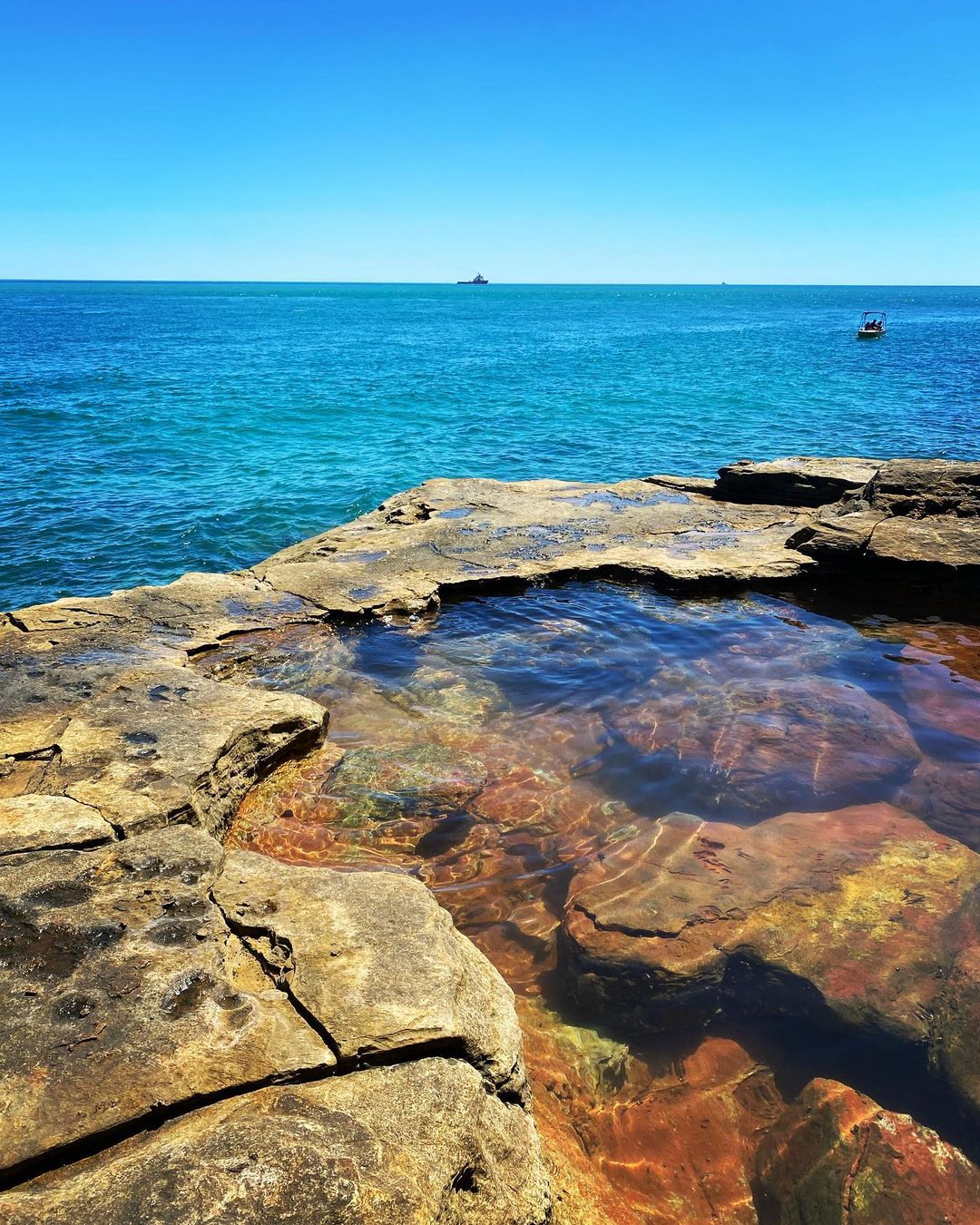 Photo credit: Made in the Bay WA - @madeinthebaywa

Even if you visit during the cool season, it will be sunny and warm. You will need to protect yourself from the sun with a hat and plenty of sunscreen. You should also bring enough water to stay hydrated during your hike along the coastline.

You can book a tour that will allow you to experience the best Gantheaume Point Broome sites. Here are some options. 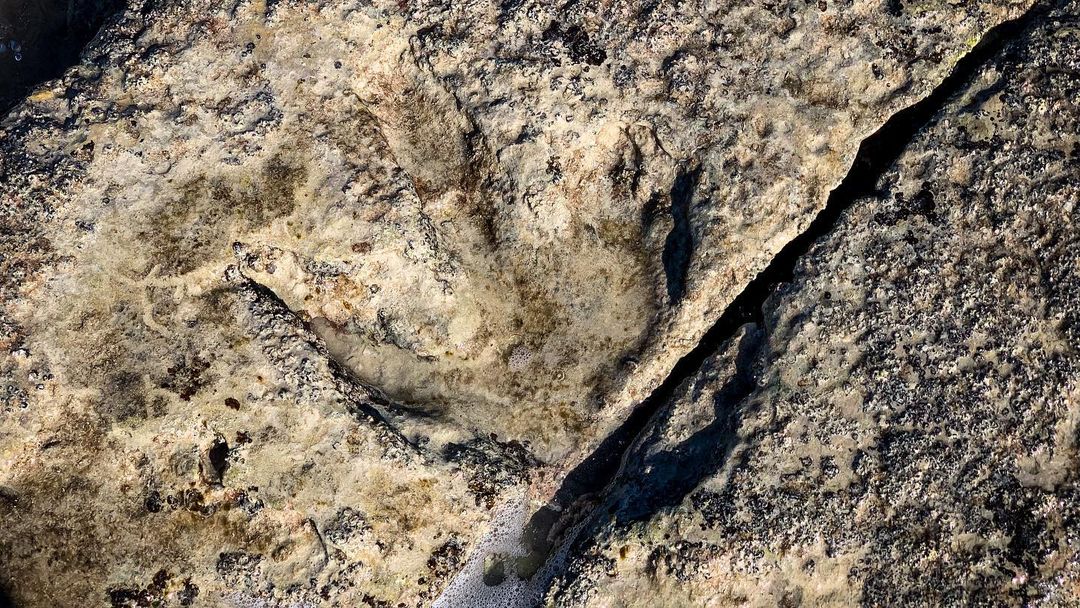 If you are looking for the best accommodations to stay at when visiting the Gantheaume Dinosaur Footprints, consider the Broome Caravan Park. It offers powered and unpowered sites, park homes, free Wi-Fi, and kitchen facilities. In addition, you can easily access the dinosaur footprint sites, just a short 10-15 minute drive from the park Hit the road on a road trip from Perth to Broome, WA

If you’re planning a holiday to Broome, we’ve put together the ultimate 7-Day Perth to Broome road trip guide with a list of unmissable stops. Plan your trip! Bounce through the north west on a Broome camel tour

What's better than exploring the beautiful Cable Beach in Western Australia's North West on the back of a camel? Find local camel tour operators and info here.