Best Things to do on a Road Trip in Shark Bay

Australia isn’t the land of caravanning for nothing.

With the country having an area of 7.692 million square kilometres, it would be a shame to not indulge in a few great West Australian road trips in your lifetime.

But if your last road trip was around a decade ago, or if you’ve only taken out your family caravan once or twice in the last five years, it might be time to blow the dust off your caravan and brush away the cobwebs of yesteryears.

Now’s a great time to recapture what makes road trips so great, especially if Shark Bay, Western Australia is your destination. You’ll soon be inspired to get on the road again because there are so many fun and exciting things to do in Shark Bay and other great places in Western Australia.

Experiences you shouldn’t miss on your Shark Bay road trip

It’s time to take out your Shark Bay map and plan for the best experiences on your upcoming road trip. The places you can go to depend solely on how much time you've allocated for this adventure. But be warned, you wouldn't want to miss a thing.

There are so many exciting things to do in Shark Bay!

The Shark Bay World Heritage Area is located around 800 kilometres north of Perth in Western Australia and is approximately an 8½-hour drive from Perth to the town of Denham, which falls within the boundary of the heritage site. The Shark Bay weather is beautiful most days a year which makes it the perfect road trip destination.

Shark Bay is Australia’s largest bay, with a beach stretching over 1,000 kilometres. It is replete with numerous natural attractions and in 1991 became the first place in Western Australia to be given recognition as a UNESCO World Heritage Area. It is home to 35 per cent of Australia’s total bird species, as well as thousands of dugongs and other endangered animals like the loggerhead turtle and green turtle.

Also, the seagrass beds of Shark Bay are the largest in the world and twelve of the world’s sixty seagrass species are found in Shark Bay. 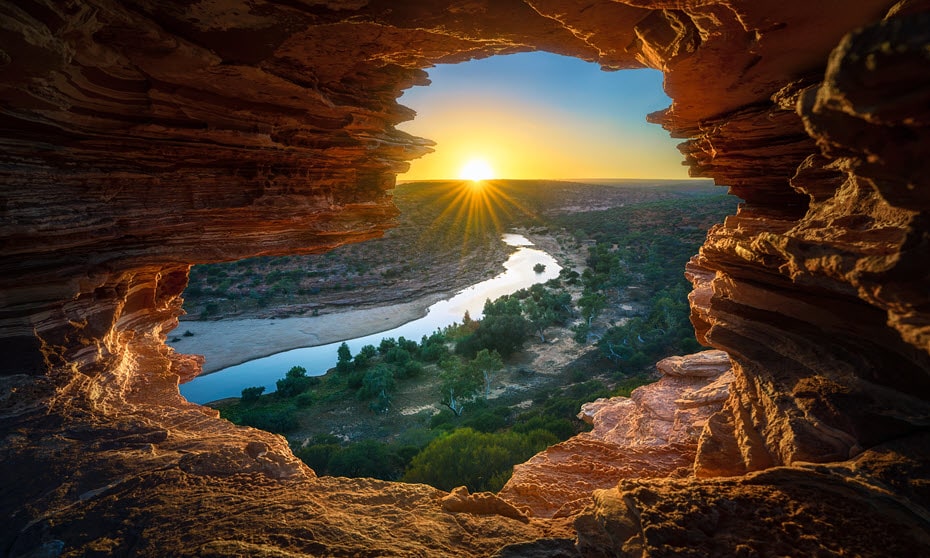 On your journey to Shark Bay, make time to stop by and explore Kalbarri National Park. Here, you can visit several great sites, including the picturesque lookouts at Nature's Window, the Loop and Z-Bend Gorge, and the spectacular Kalbarri Skywalk.

Driving up from Perth and need a place to stay?

It’s the perfect place to stop for a rest with plenty of Kalbarri accommodation available. If you have more time on your hands and can take a detour for a day or two at Kalbarri, you have a lot more options to consider, including: 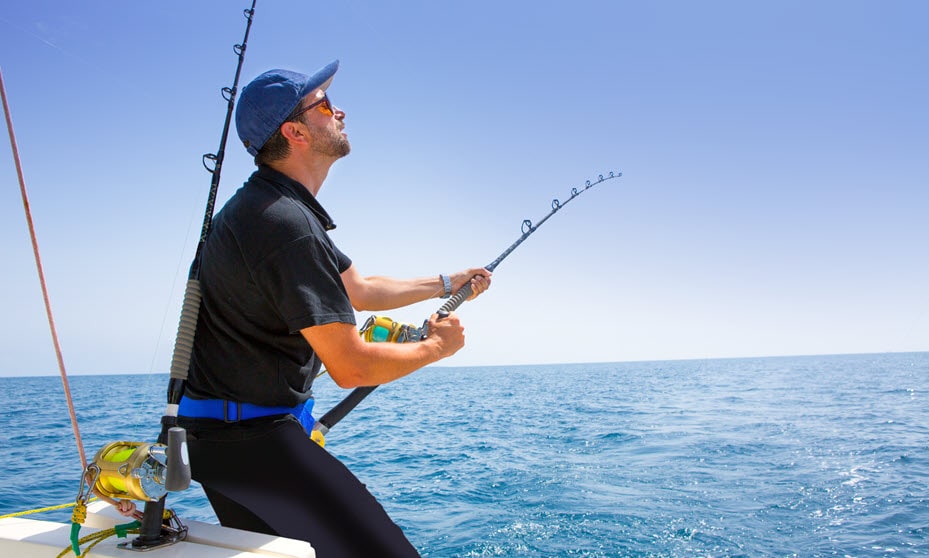 A visit to the Western Australia UNESCO World Heritage Area won’t be complete with a bit of Shark Bay beach fishing. Unfortunately, fishing rules have tightened due to the overfishing of Shark Bay’s famous pink snapper.

The Freycinet Reach (a.k.a. Henri Freycinet Harbour or Freycinet Estuary) is one of the internal gulfs of Shark Bay. It is not only a haven for dugongs but also a great fishing area.

Just make sure when you’re ready to go Shark Bay fishing that your licences and permits are ready, especially your recreational fishing licence.

Note that separate licenses are required when fishing from a boat are needed to catch certain fish species including abalone, marron, rock lobster and net fishing anywhere in Shark Bay. Also, familiarise yourself with special fishing rules in Western Australia before setting out. 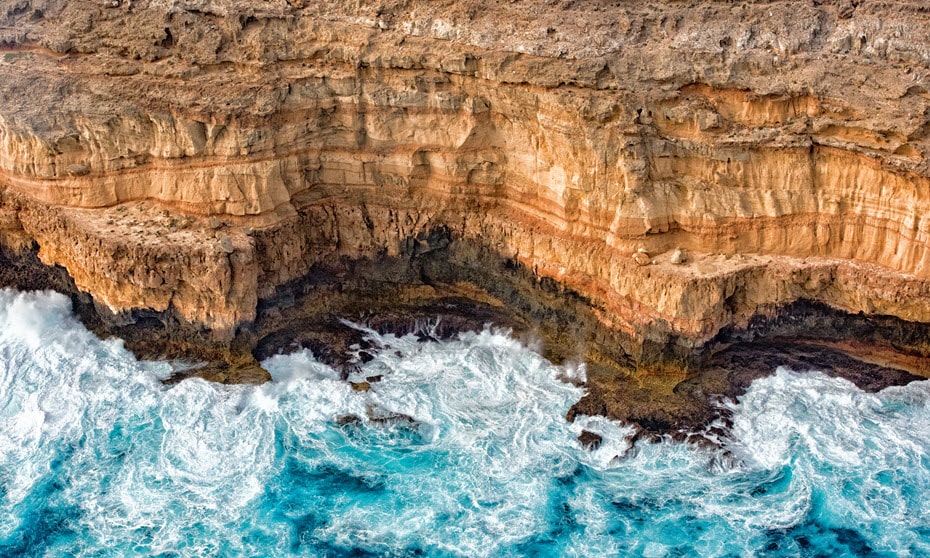 The proposed Edel Land National Park in Shark Bay is famous for its impressive cliffs, the Steep Point camping ground and the Zuytdorp Cliffs, False Entrance and Crayfish Bay.

This seemingly desolate area can be accessed only by boat or high-clearance 4WDs through the Useless Loop Road. Though the Edel Land National Park may seem barren and dry, it’s actually a haven for amazing flora and fauna and annually attracts both inveterate fishers and divers. Here, you can visit the False Entrance blow holes and go cliff fishing.

While camped out at Steep Point, you might even be lucky enough to see whales playing offshore and spot some manta rays, dugongs and dolphins, too.

4. Fish and sightsee at Nanga Peninsula Located on the western prong of the Peron Peninsula in Shark Bay is the tiny holiday village of Nanga, which overlooks the massive marine park at the Henri Freycinet Harbour on the western side of Shark Bay. At Nanga Bay, the shallow and warm water turns a striking turquoise colour.

Originally established as a sheep station, Nanga Peninsula is also a popular fishing spot accessible by charter aircraft, road or air service from Denham. And yes, they still have a large population of sheep out there.

5. Indulge in a choice of activities at Denham 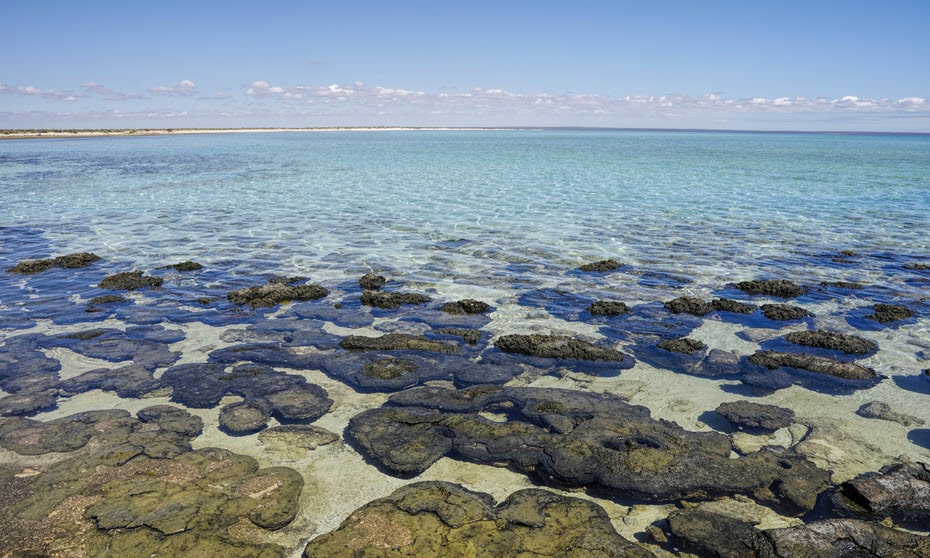 Denham is a town located 837 kilometres northwest of Perth and is part of the Shark Bay World Heritage Area. It lies to the west of the Peron Peninsula. Being part of Shark Bay, there’s certainly a lot to see and do at Denham.

On the eastern side of the Peron Peninsula in the Shark Bay World Heritage Area is the bay called L'Haridon Bight.

At its southern end lies the world-famous and rare Shell Beach Conservation Park, which is all white. The name refers to the fact that this beach has no sand, only shells! The shells consist of crushed up Shark Bay cockle shells.

Shell Beach is part of the Taillefer Isthmus, which connects to the Peron Peninsula on the northern side. L'Haridon Bight is one of the sites in Shark Bay where the water is classified as hypersaline and is where a marine reserve is situated.

If you’re in for a bit of experimenting, you can try floating in the super-salty waters of the L'Haridon Bight and see if you can float like you would in the Dead Sea.

Swim with the dolphins at Monkey Mia

Whilst on your drive exploring Shark Bay, experience Monkey Mia! It’s about half an hour’s drive away from Denham and is a popular spot for bottlenose dolphins that come close to the shore regularly to ‘mingle’ with humans.

Here, you’ll have the rare chance to get up close and personal with the dolphins and hand-feed them. The wild bottlenose Monkey Mia dolphins actually come by the Marine Park three times a day, so if you’re patient, you’re sure to have the opportunity to enjoy their company.

The friendly Monkey Mia dolphins won’t be your only possible encounters on your visit. You might also catch different species of turtles, dolphins, manta rays, whales and dugongs, whether you’re on a boat or sightseeing from the shore.

You can also choose to relax on some of the lovely white-sand beaches or swim in the crystal-clear waters. Or, take photos of the stunning rust-red sand dunes.

See the stromatolites at the Hamelin Pool Marine and Nature Reserve

Ready for a rare paleontological experience?

At Hamelin Pool Marine and Nature Reserve, you’ll have a front-seat view of the oldest and largest living fossils in the world called the stromatolites or stromatoliths. Although these might look more like regular rock formations, stromatolites are in fact microbial reefs formed by cyanobacteria - and they’re teeming with life.

The Hamelin Pool is only one of the very few stromatolite sites in the world, with the other locations being Pampa del Tamarugal National Reserve in Chile, Lagoa Salgada (‘Salty Lake’) in Rio Grande do Norte, Brazil, the Cuatro Ciénegas Basin in the Mexican desert, Lake Alchichica in Mexico's Oriental Basin and the Exuma Cays in the Bahamas.

The stromatolites are definitely not one to miss on your visit to Shark Bay!

Eagle Bluff is only about 15 minutes away from Denham. This towering cliff overlooks the ocean and the surrounding area, thereby offering a unique and breathtaking vantage point of the bay.

Here, there’s a boardwalk perched on top of the scree slope for visitors to admire the amazing coastal view of the Henri Freycinet Harbour while taking a stroll. During the summer, you’re likely to see some dugongs coming to feed up to the shore, as well as catch glimpses of sharks, rays, schools of fish and sea turtles.

During sunset, you’ll be entranced by the amazing sundown effects over the coast and bay. 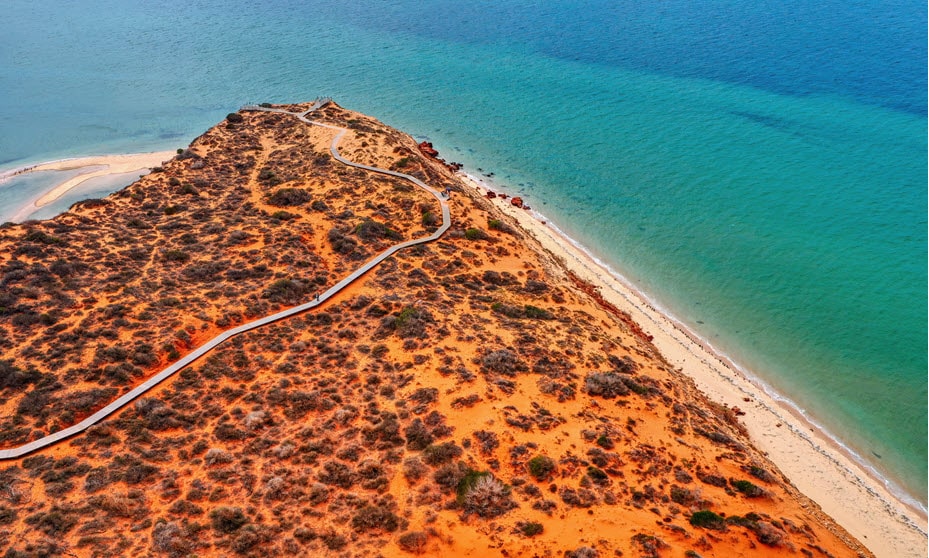 On your trip to Shark Bay, why not visit the Francois Peron National Park? 4WD driver’s dream, as you can enjoy adventuring along the beautiful coastline that features dramatic red cliffs and white sandy beaches.

At this park, rust-red desert sand meets the dazzling white-sand beach and the clear blue waters of the sea.

Here, you can visit the Peron Heritage Precinct to know more about the cultural and natural significance of the park. You can also go sightseeing from Skipjack Point, where you’ll surely enjoy the teeming marine habitat. It has observation decks that are the perfect spots to see turtles, dolphins, sharks, manta rays, birds, dugongs, and other marine wildlife forms.

You can also go fishing, snorkelling, canoeing and kayaking. Just make sure to check park guidelines ahead so you can bring the necessary gear to make the most of your stay.

Big Lagoon is located in the Francois Peron National Park. This stunning lagoon is famous for its lovely, vibrant colours and rich population of marine wildlife, including rays, fish species, dolphins, dugongs, and sharks.

Here, you can go fishing, swimming, kayaking, windsurfing and kite-surfing. You can even enjoy it from above if you book a scenic flight over the Francois Peron National Park. 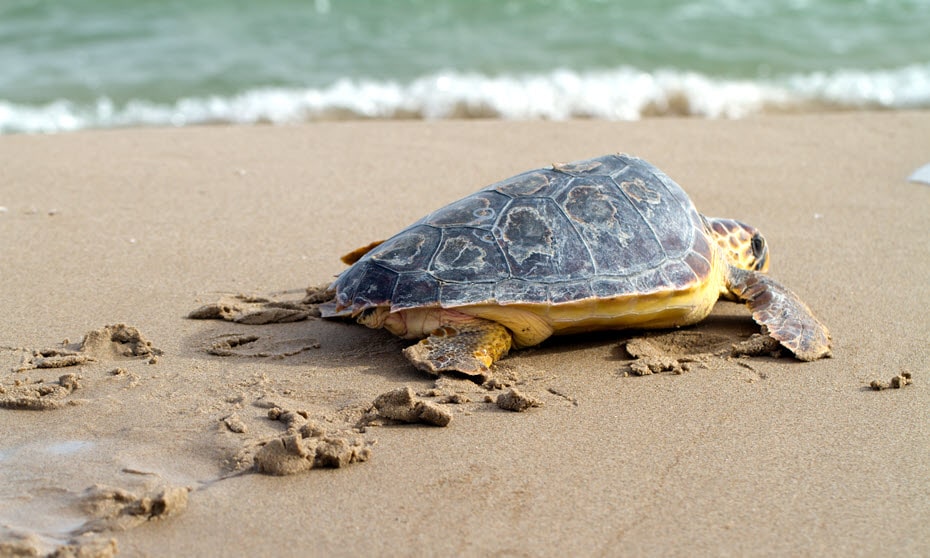 Located on the most westerly part of the Australian mainland is the Dirk Hartog Island National Park.

The island is named after Dirk Hartog, a 17th-century Dutch sailor and explorer known for being the second recorded European to land in Australia, and the first to do so on the country’s western coastline.

Dirk Hartog Island features tall exposed cliffs on the western side and protected beaches and shallow bays on the eastern coastline. It is home to a range of animals, including the endemic Dirk Hartog Island black and white fairy-wren and the rare sandhill frog.

Dirk Hartog Island is also an excellent place for birdwatching, as seabirds abound on the eastern coast and certain species nest on islands. You can explore by boat or while snorkelling or diving and enjoy the sight of manta rays all year round.

Seasonal sightings include loggerhead turtles during the summer, whale sharks in May and June, humpback whales in September and dugongs when the rest of the waters of Shark Bay are at their coldest.

Benefits of going on a road trip

Road trips are fun and exciting. However, beyond the enthusiasm they awaken with the thought of discovering something new, road trips provide several other advantages:

The best times to visit the heritage area would be between April 16th and October 28th to enjoy the best of Shark Bay weather. You have plenty of time to cover all the bases, prepare your caravan, book your accommodation, get supplies, pack your road trip essentials and embark on your road trip adventure with your favourite people.

So what are you waiting for? Experience all the beauty that this region has to offer. 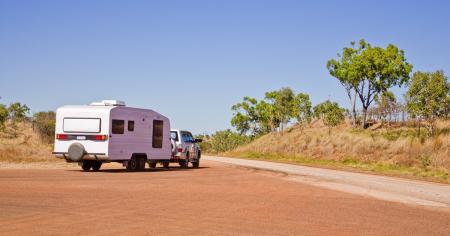 Find the 8 best road trips in WA. This guide of road trips around Western Australia will inspire you to start planning your next adventure. Check them out » 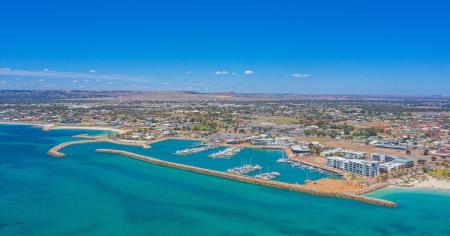 Western Australia Travel Guide: Things To Do In Perth

This Western Australia Travel Guide will keep you updated on local events & tours. Book your next adventure in WA today.